2019 - The Year I got fortunate or my work paid off, and I was selected for Google Summer of Code to work on MacPorts.

Fair Warning: Please take everything you read with a grain of salt, as I am writing this based on memory and my brain may have taken creative liberty in some places.

Here, I will try to answer some of the recurring questions and doubts I get about my experience and the ‘GSoC’ process.
Note: I won’t be describing what is GSoC and how to apply and the timeline, if you are interested in that check the links at the end of this article.

Instead, I will be more of describing my journey and experience.
Here are some things that most people ask for:

Before we get started with the questions, here is how I landed into GSoC:

This was not the first time I tried for GSoC, in my fresher year itself I was fascinated by the idea of Open Source and people working from all around the world on something that fascinates them and coming together to share their knowledge, experience and to create something without even being paid for it.

I was introduced to GSoC via a MeetUp by CodeCell, and then in my fresher year, I decided to at least apply for GSoC so as to understand the process. Being a novice(not a fan of the word noob) and having basically no idea about the art of coding and OpenSource, I started filtering the Org list based on my interest which basically includes everything, then reading through the project ideas and narrowing down based on my skill set.

I was able to narrow it down to the following: 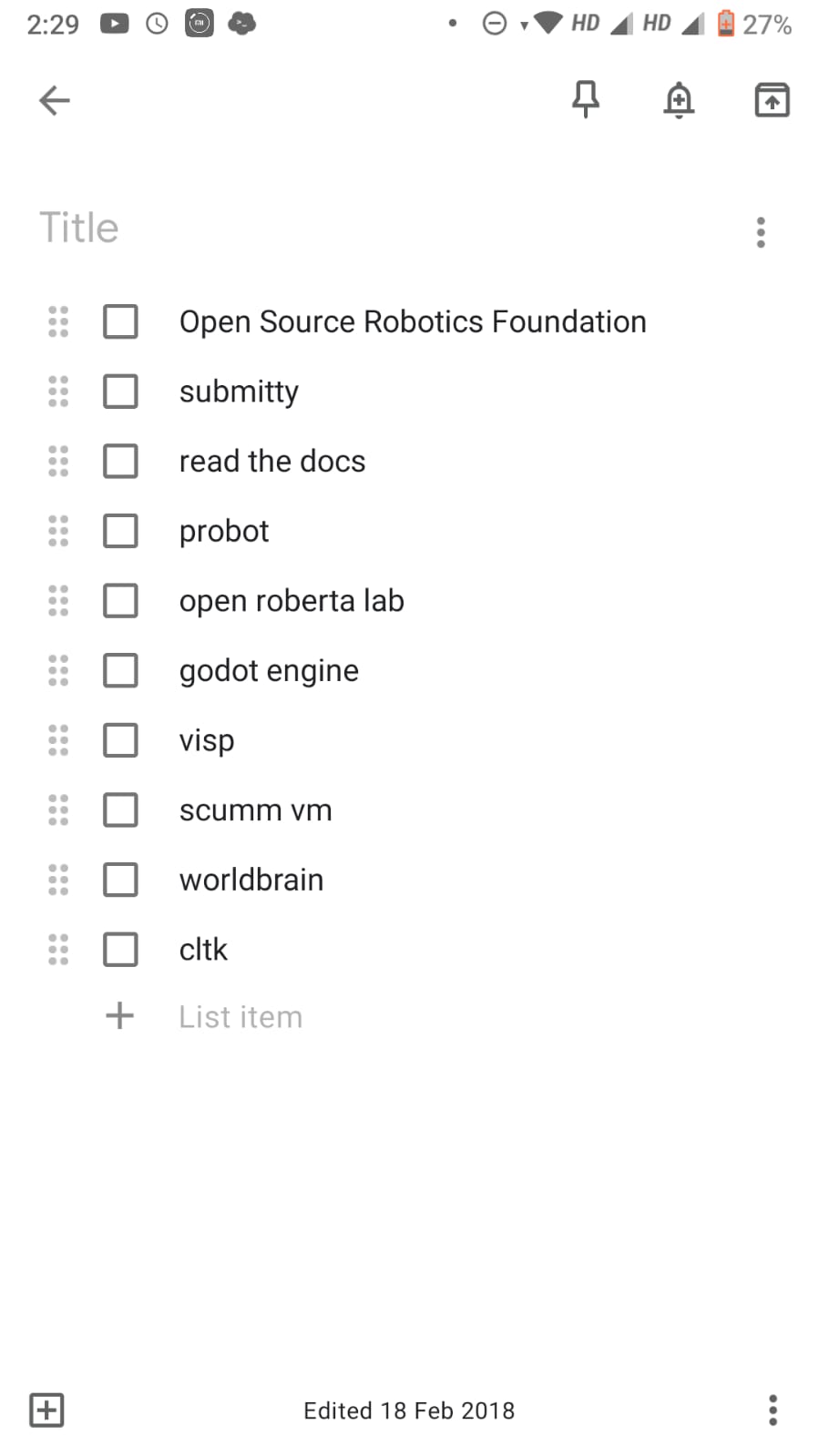 So then the easy part was done, now I had to actually contact the mentors and Orgs. This was a very hard task for me not only because I am an introvert but also the other reason, which I am guessing you have probably realized by now….Yeah, My English SUCKS!
So then I mailed to OSRF and anxiously waited for a reply, a week passed and no reply...till this point I had lost hopes and given up.

Anyways there wasn’t a real chance for me to get the project, but then just before 3 days of the deadline, not only I got a reply but also a task to do. After pulling two all-nighters I completed the tasks and was able to submit the proposal just in time.

Future me: I was proofreading this article and decided to have a look at my first proposal, I can say that my proposal writing skills have improved a lot! I would not recommend it but if you want, you can have a look at that proposal here.

Yeah, I did not do anything for a month, .

Finally, the results were announced and....I was not rejected, so yay!!
Not so fast, I was not accepted either, my proof of enrollment was rejected so mentors never even saw my proposal, yeah it couldn’t suck more.
I then tried contacting everyone, the org admin, people on IRC, google support but no exceptions are made, so I ended up not even knowing if I would have been accepted or rejected.

Lesson Learned: Mails from Google may go to spam in its own product Gmail. Always check SPAM.

Ok, so a year passed and again I was late in applying for GSoC as I was tied up with participating in my first ever CTF, organizing CTF Sessions, and also participating in SIH. All of these experiences are more, if not equally dramatic then my GSoC experience.

Now let's come to this year, MacPorts experience...so it started at the night the day we lost SIH 2019, I was tired of coming second in almost everything and decided to try my luck with GSoC again. So I stayed up all night and filtered a bunch of organizations that seemed amusing to me. After coming back home, I started stalking the MacPorts mailing list and GitHub repos to find if there’s any activity in the project I am interested in, and surely there was. Not only was there someone else working on the project but he had already prepared a good proposal and a great Proof of Concept.
So considering this I decided to mail the mentor and just say

“here are the things I know and I am aware that someone is already working on this project, is there anything else I can do or should I also submit the proposal for the same”.

To my surprise, I got a reply within 24 hours saying 2 things:

So immediately I called up my private English experts AKA my friends @dhruvi-vadalia and @Syn3rman. They helped me refine my mail, proposal basically every communication.

After improving my English I mailed on the mailing list and I got one of the best replies ever, I was pointed to a project that was not even listed in the project idealist and perfectly fitted my skill set, just like legos and then it was just a matter of proving I have the skillset and writing the proposal.

After that, I kept working on the project even during the period after the proposal submission and before the project announcement.
Yay!, I was selected this year...I was happy beyond measure.

As this article is already long enough I won’t go into my weekly work, but I can say for sure that I am very thankful to MacPorts and my mentors, they taught me how to write good code, follow the coding standards, and not waste storage space on blank spaces(yeah that’s a thing).

The overall experience was just everything I had hoped for and more.

Ok so now you know how I landed to MacPorts, so now the queries:

Ans: Nope! It’s like IronMan and Captain America’s scene from Age of Ultron.

Ans: This really depends on your org and more specifically your project. For me, it was anywhere from as little as 15 hours a week to 40 hours a week. I know folks who worked even more than that.

If you have any other queries or would like to point out my English errors or are just very kind and would like to praise me and talk with me, feel free to comment or reach out to me anywhere.