The project was done properly and followed the software development process. Here, I will be going through how we came to do the project and not the actual code/website, for that please check the demo deployment and/or the Github Repo.

This all started with the urge I had to make something in November of 2019, I had no winter internship and wanted to learn REACT. So with this, I prepared a rough plan and poured the idea into the minds of my team. We then contacted the college in-charge of SIH.

For those who don’t know what SIH is, it is India’s possibly world’s biggest Hackathon, it really depends on how you define a Hackathon, Smart India Hackathon is where companies and government bodies post their Problem Statement and students from all over India participate to come up with innovative solutions.

Ok back to the story, yeah so we prepared a proposal about the whole idea based on the changes by SIH which I am not covering here, you may refer to the proposal for more details. Once the proposal was approved with some changes we started designing the platform and came up with the following design: 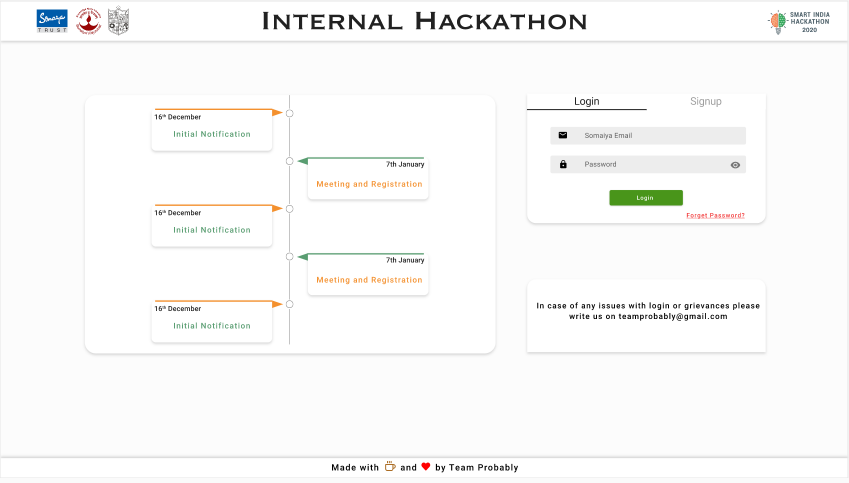 Since we have no designer in our team, most of the design work was done by me, so please don’t judge it too hard. I personally was very happy with this design, one of my best to date.

With a half baked design, we finalized the tech stack as React for frontend and Express backend with MongoDB as the database. All of which will then be nicely containerized and deployed on AWS EC2 instance.

We had most of the features done in about a week’s work but then we had to make a ton of changes based on the feature requests by the college. I was on a trip by the time it came to deploy the project and go public, so I helped as much as I could via phone.

Thanks to the extraordinary people in my team, everything turned out fine with only a few hiccups. The website looked almost exactly like the XD design. Speed was just perfect, it took us 3-4 hours to figure out Links in next.js but once that was done, the full website was loaded on the first load, and then it just magically worked.

We had a CRON job set up for scraping the Problem Statements from SIH official website and syncing with our website. Another CRON backup job was also there, along with some amount of logging.

To be honest, the response to the website was underwhelming as very few students used the tags and comment features, but the few kind people who did give feedback were majorly good.

Even after deployment and the applications period we had to make pages for judges and admin to use and rate the projects so to help them in their filtering process.

Overall it was a great experience building and delivering this project as it was like working for someone and not just doing whatever I felt was right as there were feature requests, product reviews, and formal meetings and presentations done throughout the period of the project.